“Never underestimate the power of a small group of committed people to change the world. In fact, it is the only thing that ever has.” – Margaret Mead

While organizing Mobile Tech 4 Social Change conference in Halifax, a recurring theme emerged: a down-turn economy where non-profits are struggling to fund their cause. Many of these charities have not seen an increase in government funding for the past 15 years. Due to increased unemployment charities are now experiencing a massive increase in the demand of their services. As a result, they are forced to choose between cutting services or cutting staff.

Following the event, I shared an inspiring conversation with Sera Thompson from The Hub, asking the question: How can we help these charities? They already have the knowledge and experience to solve problems on a local level, they just need more resources to do so. I’m a software developer by trade, so my first thought was ‘I can build them software’. But there is only one of me and a lot of deserving charities. But having just organized a successful Mobile Tech conference with talented members of our community gave me an idea: What if we formed an army of software developers that together as a collective could create a whole fleet of applications, in which the proceeds from each application would be donated to local charities? Thus, iPhone Hackthon 4 Charity was formed.


Hack: a quick or clever fix to a difficult problem.

The idea is simple. Bring together talented software developers, graphic designer and marketers to build as many iPhone applications as possible over the course of a weekend. Each team decides what application to build and ultimately which charity will receive the proceeds from the App Store sales. 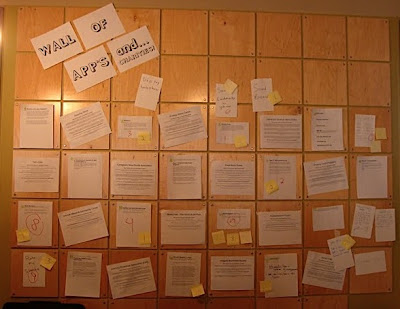 The weekend started with a conversation around the Wall Of Apps discussing what applications were possible to develop in two days. Of the dozen great ideas, we narrowed our selection down to three and then split the fifteen participants into teams:

The weekend was also about improving and sharing skills, as well as building and strengthening connections. It was inspiring to see strangers quickly become friends and accomplish a great deal in a short amount of time. At the root of everyone’s hard work was the shared belief that their efforts were making a difference. Will Lachance said it best in his great blog post, “the feeling that the work you’re doing will be used for good”. Charity doesn’t have to be about making a donation once a year as a tax write-off, but instead about uniting a community and allowing individuals to utilize their talents for a common goal. 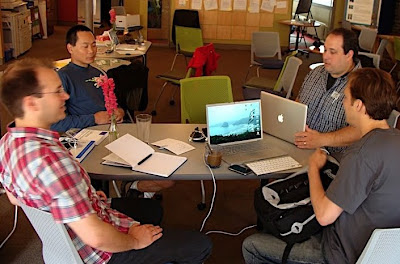 It was great to see the community support for the event. From the thirteen local charities that submitted proposals, three were selected to be receive the proceeds from the applications:

The iHackHFX teams hope to have all three applications finished and available for sale on the App Store in mid to late August. For those charities that were not selected this round, don’t fret. Due to the success of the event and strong support from the participants, we are now in the process of establishing a not-for-profit legal entity to allow future events. We also hope this organization provides the mechanism for the idea to spread to other cities.

This idea also introduces an intriguing new funding model: sales from the applications created in a weekend have the potential to help fund charities for months to come. Apple gives 70% of sales back to the developer, which means that if we sell an app for $0.99, and it sells 1000 copies, that would generate $700 for the chosen charity. If it sells 10,000 copies, well…you get the idea. The amount of money that each app will generate is yet to be determined but with over two billion downloads on the App Store, there is potential for an application to be a hit.

Thanks to The Hub, we were able to create the ideal work environment. Their open concept space was a great platform for collaborative dialog between teams. And to prove that work doesn’t have to be painful, attendees enjoyed afternoon massages thanks to the good people at Be Massage, t-shirts with styling Nick Brunt artwork thanks to Mind Sea, and our own personal DJ thanks to Rich+ness. Delicious meals from Local Source throughout the weekend were also provided courtesy of InNOVAcorp, Broadband for Rural Nova Scotia and Huminah Huminah, and snacks thanks to Splice Apple Experts. 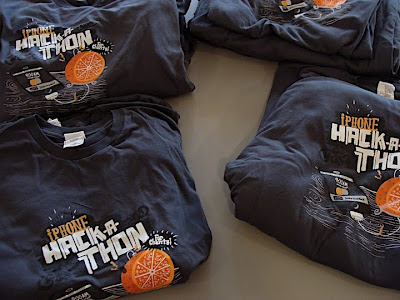 Overall the weekend was a huge success! Haligonians know a sunny weekend is a rare and beautiful thing, so huge kudos to the fifteen participants who put common good above their own personal interest.

Big thanks to the lovely Nadine LaRoche of Interrobang Inc. for her great press release, and Nick Brunt and Ian Conrad of Say Hi There for their incredible marketing support. Huge thanks to Tracy Boyer of The Hub for her incredible dedication and helping make the event a success. And the weekend also wouldn’t have been possible without our fantastic sponsors!